More than a year has passed and I’m finally able to post something here on my blog. I’ve been very with teaching and photography that’s why I can’t catch up with writing hehe. So I’ll be updating few things about what happened to me during my so called ‘hiatus’.

Last school year was a blast and I’ve had the best set of students and parents. They were very loving and supportive. So many have happened and we’ve made different sorts of memories together. During the first months with them, they always follow the rules, but as we get closer to each other, they become hard headed, the usual kind of students. They made me angry, annoyed, made me shout, made me almost (but I didn’t) cry. Despite that, they made up for what they’ve done -cleaned the classroom willingly for almost (just) a week and  prepared a surprise to reconcile with me. And oh, I love their letters and fanarts of my faceeeee.😂 I’ll be uploading photos of them before I meet my new set of students. 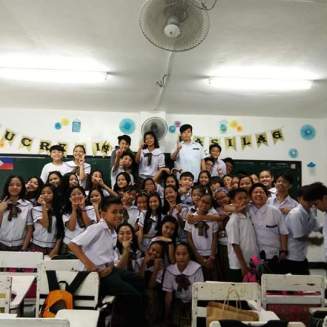 Regarding my travel stories, we went to Batangas last May 2018 and I was able to see Taal Volcano up close (sort of😅) nah it’s still far😅. But the roads going there were scary because of rerouting so we had to pass through a very narrow road with sharp curves that are almost 70-90 degrees inclined😱! (don’t know if I explained it well😅). 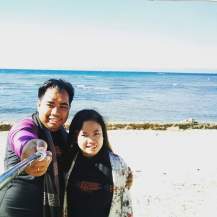 I also had the chance to travel to Bohol and ride a plane since my first time last April 2014. I saw the famous Tarsier and Chocolate Hills, we even went to Panglao beach and did island hopping. I wish to get back there ASAP!😁😎 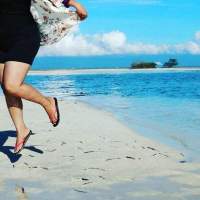 My latest travel was in Bataan and Batangas. We went to Las Casas Filipinas de Acuzar where you can fund old Filipino houses that was bought by Mr. Jerry Acuzar from different parts of the country and transferring it to Bataan piece by piece – I’ll explain further on my next post hehe 😉. We also enjoyed the island hopping. 😎 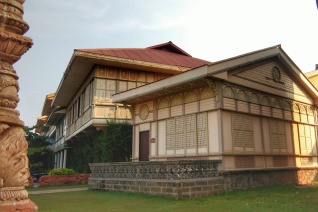 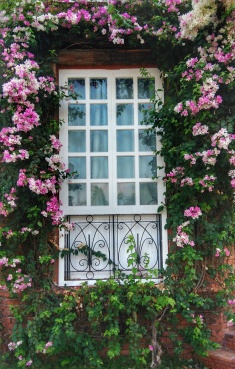 On the other hand, we went for a swim in Laiya, Batangas and we’ll be coming back there this May 28. 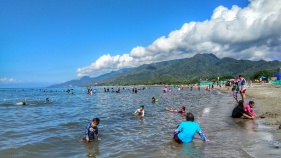 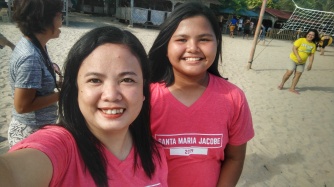 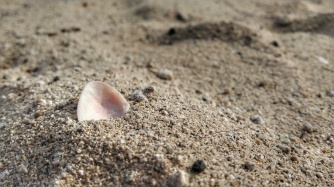 These days, I’m busy watching Korean dramas like He is Psychometric, Waikiki Season 2, Her Private Life, and The Abyss.  I’m also having trouble with sleeping, and I’m worried because school will start within two weeks and my biological clock isn’t working properly. I think I need to go camping and leave my phone to adjust my sleeping habits huhu.💔

This is it for now. I’ll be posting more details of my ‘adventures’ I was in my hiatus.😊

I got married last December 2017❤ and gained a lot of weight💔! 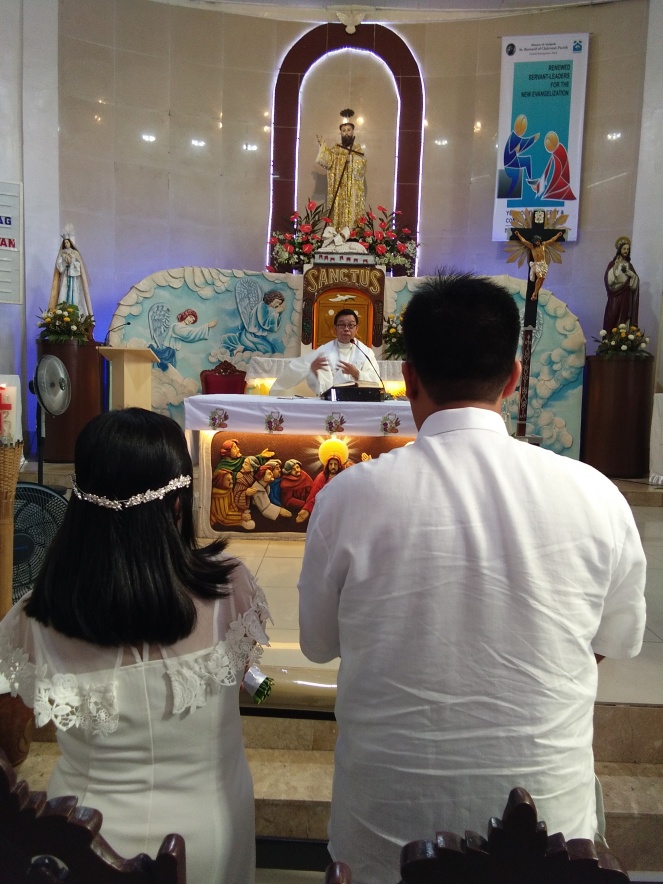 Here are more photos of what I did during my break. 😁🙋 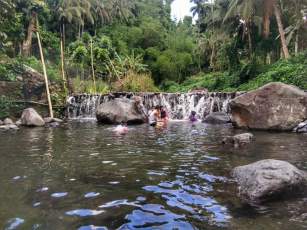 We had a wonderful summer trip at Sabang Beach, Baler, Aurora, Philippines last April 1-3, 2016. 😀 😀 😀 Surfing is indeed famous in this place but I was not able to try it. Gotta add more photos and stories about this when I get back. 😀 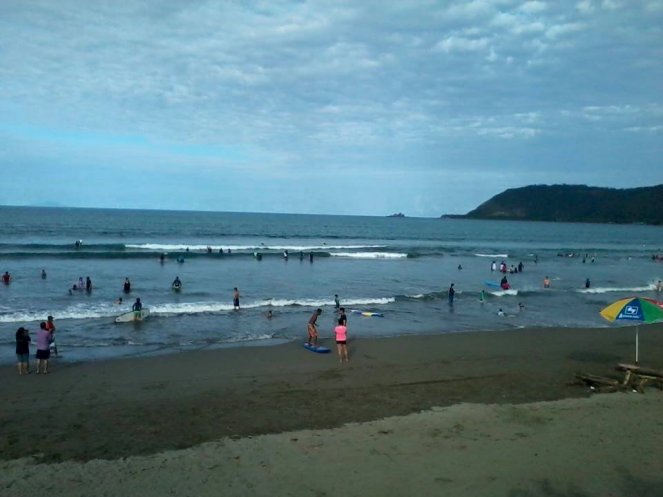 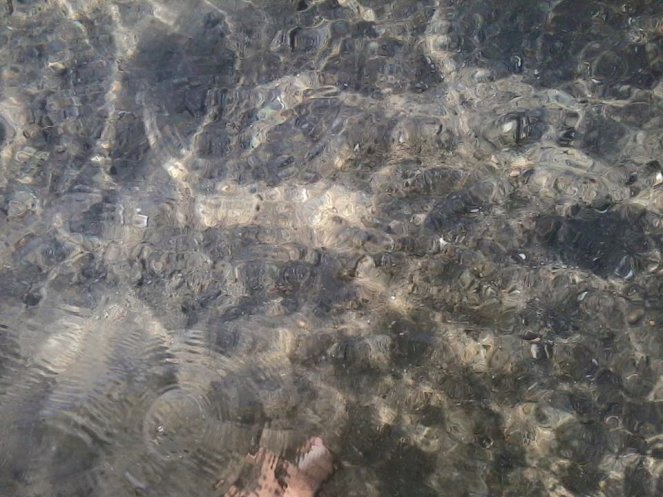 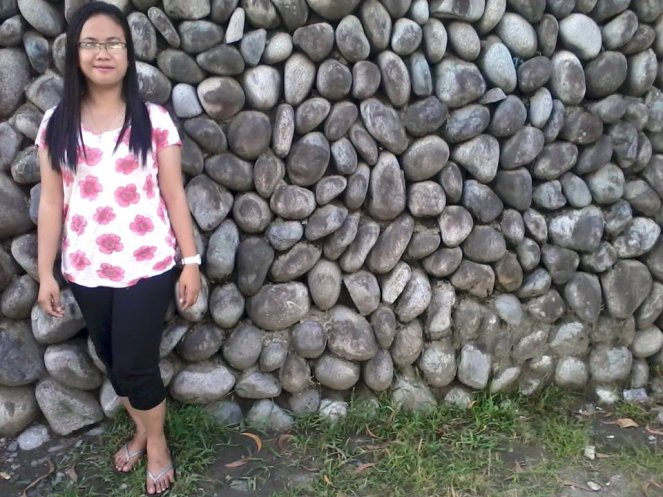 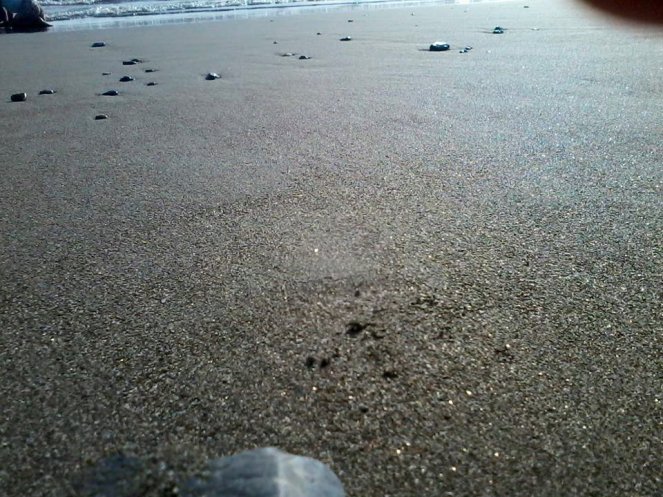 The first pair of over sized Bowling shoes I wore (left) with Poll (right).

Yesterday was one of the days I had a ‘first’ – my first time to play Bowling. I was excited and nervous at the same time because of the fact that there was a tournament held at the same time we played, and the issue is that better players will see me fail with playing. But luckily, I was not the only one who played with less skills. There was Poll, my classmate slash friend, who also got his skills left somewhere else. On the first few tries, most of the balls I threw went on the sides and eventually running through the canal, a shame that I scored nothing. But then, confidence grew out in me (and of course I copied the moves of the players having the tournament, sshh) and I successfully hit 9 pins! Such an achievement for a newbie like me, and for Poll of course. It’s a nice experience because I learned a new thing and from my mistakes in the process.

I remember EXO SHOWTIME, they also played Bowling on a certain episode of that show and Chanyeol was not able to get a good score. (by the way, I only scored 50 points) I miss EXO, the original OT12. Kris oppa. 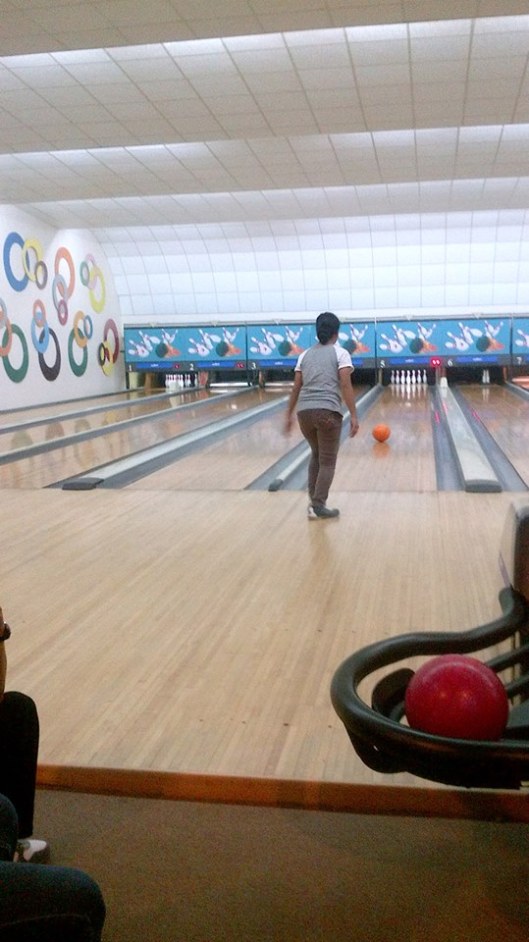 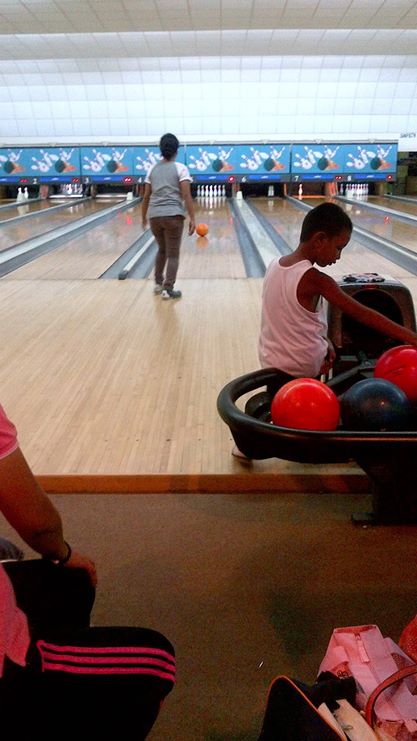 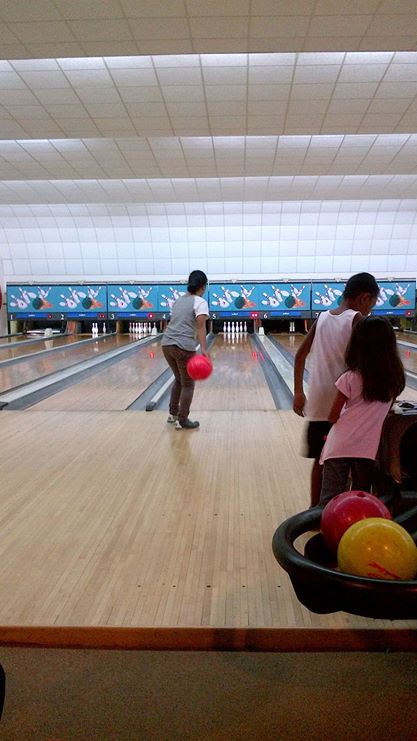 This trip was really unforgettable for me. One of the reasons was the thing about me being able to ride an airplane for the first time in my 20 years of existence in this world! And  It was really a new experience for me. I’m not kidding and I was really afraid when the plane was about to take off, I felt my knees tremble and my palms became sweaty cold. And when the plane was high soaring up, my tummy felt like there were hundreds of butterflies inside it, so good I did not vomit inside the plane, it will be embarrassing. In Cebu City, we traveled from town to town to visit various churches, unfortunately, some of them are under reconstruction because of the earthquake that ruined them. Most of the churches in that place were hundred years of age and was built decades ago. I saw the cracks and the ruins of some belfries, a proof that the quake was so devastating. Seeing the cracked buildings, roads,  and some homeless individuals made me realize that I was lucky enough to not experience a terrible thing like that. despite I cannot help them through material things, a prayer will always be powerful. Now, the people of Cebu were doing their best to reconstruct and restore the damaged buildings. I believe that they can surpass that challenge because they have a strong faith to the Creator.

Three days worth of walk is really tiring but at the same time fulfilling.

I love the peace sign yey! Sitting in front of a church was such a nice thing to do. I was only able to see this place on TV, but here I am! 😀 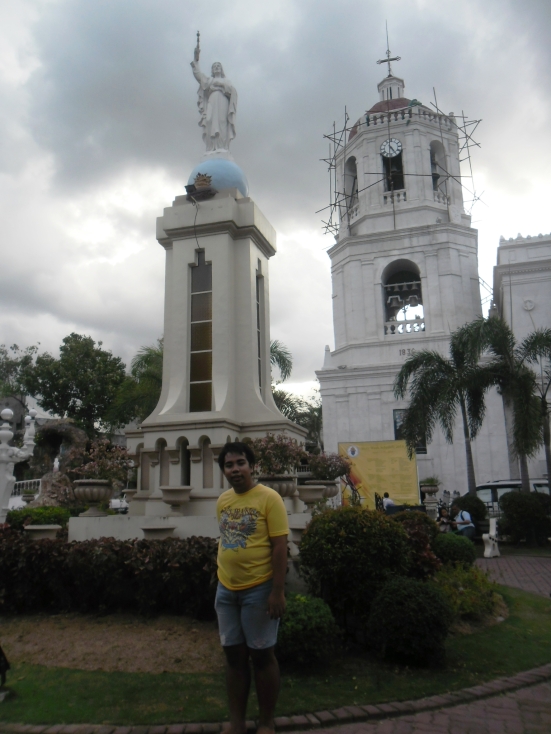 He was standing in front of a church wherein the belfry was being reconstructed. 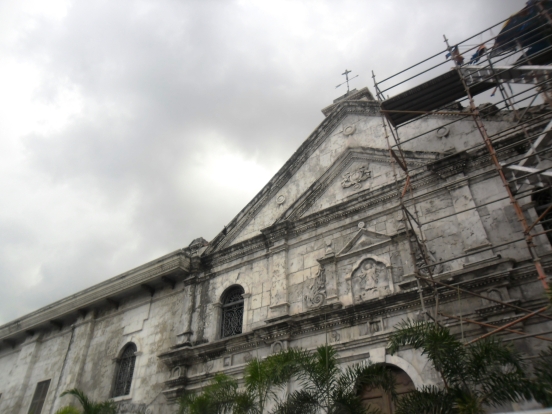 Most of the churches in the city were greatly damaged by the earthquake last year. Even the church of Sto.Nino was not spared.

The actual image of the Sto.Nino that was brought by the Spaniards from Spain to the Philippines. According to Philippine history books, the king of Spain gave this image to the wife of Haring Humabon (Carlos) and baptized her with the name of Juana from Amihan. The image was said to be miraculous that when the whole tribe was burned, it remained whole.

A detailed carving on cement was beautifully placed on the walls at the back of the church. This was prettier than the ones carved near my place. Filipinos were really talented.

This plaza became the grounds for the holy mass, it was outside the Sto. Nino church which was still under construction. It was filled with hundreds of people that attends the mass.

It is a pain in the heart to see this church like this. It was old and damaged. The cultural heritage of Cebu was threatened by a natural disaster.

The church of Guadalupe, with me in front of course.

This cross of  Tindalo wood encases the original cross planted by Ferdinand Magellan on that very site on April 21, 1521. Amazing. Really. At first, I forgot that we were in Cebu, and also forgot this thing, but there I saw it with my very eyes and not from textbooks or internet. 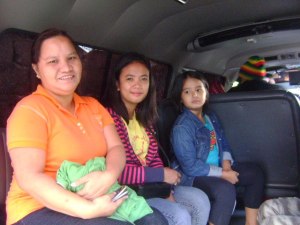 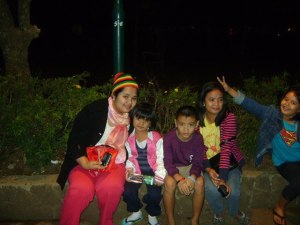 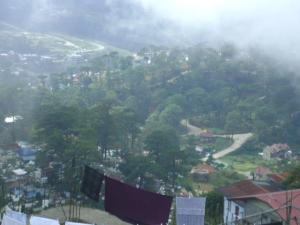 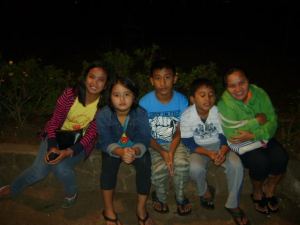 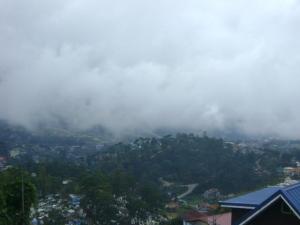 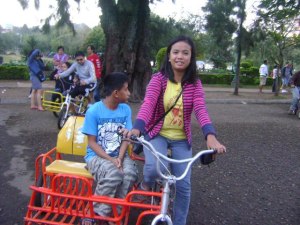 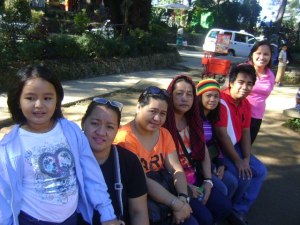 Way back December 2012, we traveled to reach Philippines’ Summer Capital, Baguio City.It was really cold up there and I saw fogs almost on the ground. The sceneries were great and the people were hospitable. Fresh strawberries tasted really good, I even tasted strawberry “Taho”  (Filipino Yogurt) and ice cream. Also, having companions on a trip like this makes things enjoyable at the most. All in all, it was a nice trip.

All posts and contents are ©jessasmiley unless stated otherwise. Do not use or steal them without permission. Thank you!